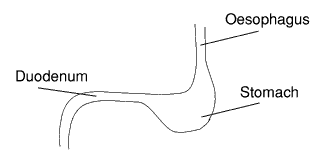 Peptic ulcer refers to an area of the stomach or duodenal lining that becomes eroded by the stomach acid. These are known as stomach and duodenal ulcers, collectively known as peptic ulcers.

You may notice no symptoms although you have an ulcer, but frequently they are associated with indigestion or pain in the upper abdomen or even lower chest. This pain may be worse before or after eating and frequently wakes you in the early hours of the morning. The pain may go to the back or sometimes be perceived elsewhere.

If an ulcer bleeds you may vomit blood or partially digested blood (which looks like coffee grounds) or pass black stools (melaena), which contain changed blood, when you go to the toilet. If any of these happen call the doctor immediately (even out of hours).

Many factors make you more likely to have an ulcer.

Your doctor may treat you on the assumption of the diagnosis, but may well arrange either a barium meal X-ray or a visual inspection using a fibre-optic tube passed down the throat (upper gastrointestinal endoscopy). The endoscopy is preferred by the experts as they can see the lining of the stomach and duodenum and take samples (biopsies) that allow them to rule out more serious conditions and to look for the presence of Helicobacter pylori.

A simple blood test or a test which measures the chemicals in your breath may also be used to look for evidence of Helicobacter pylori.